Almost a year ago, Frontline ran a detailed article of how Stand Your Ground laws fare when broken down by race, based on the work of the Urban Institute’s Justice Policy Center. The study used FBI data on homicides from 2005-2009 (43,500), singling out the cases of single shooters targeting a single stranger. So, then, with all the data, is there a racial bias in the laws?

Sometimes, a picture – or, in this case, a graph – really is worth a thousand words. 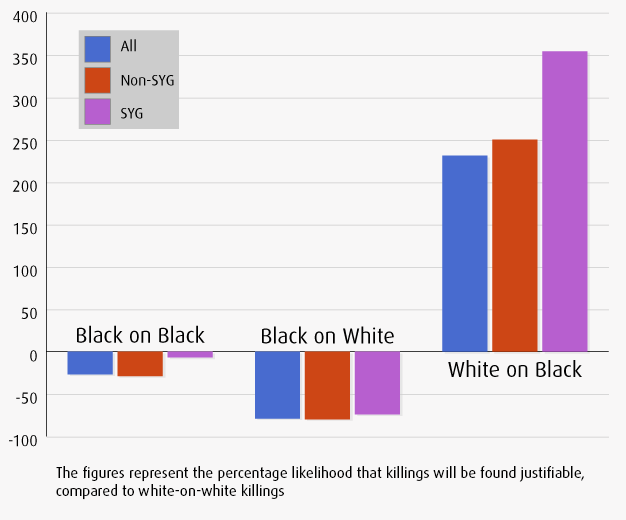 Note: the single problem I have with this study (or at least the single one I can think of right now, but I’m low on both caffeine and sleep) is that the researcher conducting the study did his limitations in such a way (single shooter targeting a single stranger, which worked out to about 5,000 cases) that it seems plausible that many Stand Your Ground cases that have roots in domestic violence have been ignored in the data.

That said, the data is damning, and I doubt adding in domestic violence-related SYG cases would radically change these numbers.

I’ve been putting out fire with gasoline.